On Friday, October 21, 2016, Hans Niemantsverdriet received an honorary adjunct professorship from Jiangsu University in Zhenjiang (Jiangsu Province), in a small but dignified academic ceremony (see photo). The title, which is essentially valid for life, allows him to teach at the university and perform research at the School of Materials Science and Engineering, however, without obligation to do so. The appointment is an initiative of its professor Songjun Li, President of the Chinese Advanced Materials Society, and an expert in polymerization catalysis and sensor technology.

After the ceremony, attended by about 150 staff members and graduate students, Prof Hans presented a lecture, entitled “Catalysis and Future Electricity Technology, What is the Connection?”, where he introduced the research of the SynCat laboratories at Beijing and Eindhoven. He explained among others that electrolysis of water will become key technology in the future, and that electrocatalyst optimization will heavily depend on combined computational and experimental approaches. Catalysis will be an indispensable discipline for energy technology.

In the evening, Dean Guanjun Qiao hosted a dinner at Jiangsu University’s Faculty Club Restaurant, featuring exquisite dishes of the Jiangsu Cuisine, amply accompanied by excellent local red wine – for the foreigners – as well as liquids with considerably more alcohol – for the Chinese hosts.

Jiangsu University is among the oldest academic institutions in China, counts between 30.000 and 40.000 students, and ranks within the national Top 50 (rank 48). It is well known for its excellent materials science program. For Syngaschem the new contact presents interesting opportunities to extend its network and to start a collaboration in the area of materials for electrolysis and fuel-cell catalysis. The Dean of Materials Science expressed interest in the scientific leadership program of the SynCat Ac@demy.

Hans is now honorary professor at two institutions, namely the universities of Cardiff (2013) and Jiangsu, while he holds a Honorary Doctorate from Aalto University in Helsinki (2014) as well. 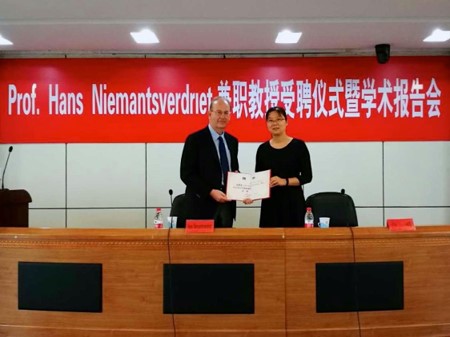