Dr Xiong Zhou, together with the students Weijun Guo and Junqing Yin, spent many months of painstaking work on the STMs at SynCat@Beijing and at Peking University, to successfully reveal how ethylene adsorbs and converts into a chain initiator called ethylidene (CHCH3), after which additional ethylene molecules repeatedly insert in the metal-carbon bond to form an oligomer chain of  up to 14 molecules: polyethylene. The catalytic surface which enables this fascinating type of surface chemistry is an iron carbide, which is very close to the (102) surface of cementite, Fe3C, formed on top of an Fe(110) single crystal. Density functional calculations were essential in the interpretation of the images and enabled the identification of the CHCH3 intermediate in particular.

The generally accepted mechanism for olefin polymerization, proposed almost 60 years ago by Arlman and Cossee at the Shell Laboratory in Amsterdam, is that the polymer elongates at one end through olefin insertion into the metal–carbon bond that anchors the chain to the active catalyst. The in situ scanning tunneling microscopy study reported in Science visualizes this process at the atomic level, as shown by a short movie and by several snapshots of adsorbed ethylene, the ethylidene intermediate, and the growing chain at various lengths. The sequence of events agrees well with the Arlman-Cossee mechanism, be it that these authors did not envisage the involvement of the CHCH3 intermediate at the start of the chain. This, however, represents a minor modification only.

Under the catchy title “Growing polymers, caught in the act,” Prof. Joost Wintterlin, an internationally renowned STM expert at the Ludwig- Maximilians-University of Munich, Germany, places the work in perspective of what is mechanistically known in the literature. He notes that the STM results in the article provide molecular level insight in almost the entire sequence of processes involved in the initiation and growth of a polyethylene chain.

We sincerely congratulate Dr Zhou and all his collaborators with this fantastic success of a truly seminal study on the molecular visualization of polyolefin growth. The work represents an absolute highlight in the history of SynCat@Beijing, and most likely of the other participating institutions, namely the Beijing National Laboratory for Molecular Sciences of Peking University, the State Key Laboratory on Coal Conversion in Taiyuan, and SynCat@DIFFER, Syngaschem BV, Eindhoven, as well. 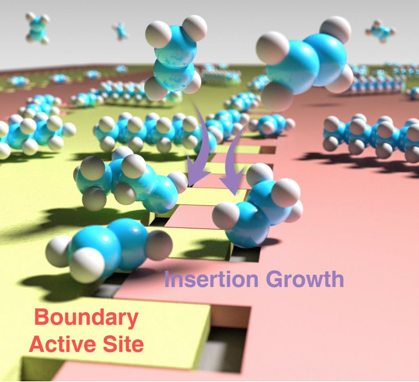 Schematic illustration of the ethylene polymerization by the molecular insertion mechanism on a specific site at the boundary between two neighboring carbide domains.